I spent a lot of time recording the talks, thats a tiresome and demanding task, and you actually really don’t have time to pay attention to the content of the talks. We had however solved a large problem from last year, we purchased a 1000€ microphone because the other cheaper, but still rather pricey, microphone hadn’t really lived up to our expectations, and we have had to change batteries a lot.

After the talks though we had some time to experience the vibes of the festival, and oh boy it was great – ofcourse there was a lot of techies such as myself, but also a bunch of artists and activists, even a few politicians (who surprised pleasantly).

We brought caravans this year … it’s was a mess … expensive, and slowly and took a lot of effort, next year i want to figure out something better. 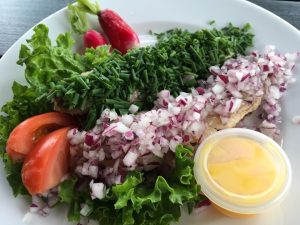 On the last day we visited some of the ordinary tourist”traps” on the island, among else the cold-war-museum with a 70-meter high listening tower – the view was great, aaand then we had dinner at a traditional smokehouse where we was served the traditional “Sol over gudhjem” (meaning: Sun over Gudhjem, where Gudhjem refers to a city on Bornholm).

It’s basicly smoked herring with chives and onions, with a raw eggs.

Im so much gonna be back next year! The talks, the island and the people, both young and old, couples with kids or singles – it was a real diverse flock of people.

Se you all next year!